One of my favorite moments in sound design history comes during the intro of Steven Spielberg’s 1979 blockbuster, Jaws. In a wide shot of the smooth ocean water, we see the character Chrissie in silhouette from the moonlight. She lifts her leg, points her toe toward the sky and gracefully sinks beneath the surface of the water. As she does, we hear the foreboding sound of a nearby buoy bell begin to ring.

This moment truly sets the tone of the scene and, arguably, the film. It happens three shots before John Williams’ masterful two-note theme is introduced, and it spells doom for Chrissie.

After the inevitable shark attack, Spielberg shows us an eerie shot of the gentle water settling from the wake of the incident. The lone buoy bobs ever so slightly in the distance. Chrissie is gone, the buoy bell persists, and we fade into the movie with the understanding that no one will be safe.

That was then. Now, I wonder if video storytellers themselves are safe from a major trend. What does it mean for us when fewer people are listening to the audio of videos on mobile and social media networks—either because they have the sound turned off by default in their feeds or because they’re sneaking a peek in a quiet environment? We may not all be making blockbusters, but in the past, sound has always been a major part of our toolkits.

Here are a few things to keep in mind when crafting video content in an era when sound takes a back seat to imagery.

Silent era films can act as a reminder of the strength of the moving image and the importance of the mise en scene. Often old silent films are known for their slapstick nature and for exaggerated expressions, but you can learn a great deal from watching the classics.

Alfred Hitchcock’s 1927 film Downhill is a great example of how you can convey powerful emotions without sound. The main character, Rodney, suffers from extreme nausea and mental deterioration while returning home on a boat. During this sequence, Hitchcock not only used camera tricks and dramatic angles to disorient the audience, but he even tinted the film a nauseating green color to connect us with the character’s inner turmoil.

I could go into great length about how we perceive characters’ movement and position within the frame, but the basic idea is that characters moving from left to right are predominantly perceived as advancing through time and overall positive, while the opposite is perceived as a regression and generally negative. If you want a dive deep on this, I highly recommend Roger Ebert’s fantastic article “How to Read a Movie” and a study released by Cleveland University on the Directionality of Film Character and Camera Movement.

Even in the sound era, Hitchcock clearly understood and took advantage of this psychological effect. In the opening of Strangers on a Train, he subconsciously establishes the protagonists and the antagonist of the film using only the characters’ opposing movement through the frame.

The film or video frame is often referred to as real estate. Be sure to take full advantage of the space in which you work.

2. Cinematography is your ally

The cinematic quality of online videos is growing as much as the online video market is itself. Cutting-edge technology that’s smaller, cheaper and that files and records in 360 degrees is allowing video creators to bring high production value to their videos.

But it’s important to remember not to let technology dominate your choices as storytellers. Often it’s best to remember the fundamentals that will never change and never be exhausted.

Without sound, cinematography remains your biggest ally. Countless questions arise—and can help guide you. How you use framing and lighting gives you great power to inform the audience without the need for sound. Is your subject’s path clear, and how do they visually react to their struggles and conflict? Are they confident, or do they feel insignificant? Should the confident character occupy a large portion of the frame, and should a less confident character remain small in the frame? Should the cinematography shift as the subject gains confidence? What does symmetry say to your audience? What does a canted, or tilted, angle say? These visual choices serve the story, your characters, message and actions.

Smart composition, lighting and camera movements can help you tell a story, with or without sound. The film—and journalism—adage of “show, don’t tell” may be more applicable than ever in a time when less importance is placed on sound.

3. Think beyond the captions for storytelling

Since networks and federal regulation started to require all social videos to have captions, it has become easy to be overly reliant on the captions to tell the story. While the captions are certainly important from an Americans with Disabilities Act standpoint, an opportunity to get creative with on-screen text remains.

For example, make the text part of the environment and part of the subject’s world. Motion-tracking techniques allow you to use text to attach a message to an object, person or location. Bring text to life by using animated typefaces. By applying animation to text, you reinforce the meaning of a message and further infuse personality into the scene.

Finally, tell a story with typographic design and layout in mind. In video especially, typography is often treated as an afterthought, but it can and should be much more of an integral part of the audience’s journey. See a good example below.

I leave you with this: The question of whether mobile is killing design seems to be frequently debated within the design community. While it’s clear that mobile changes how design is executed within a given format, it also allows us to experiment and define what it means to work within a new framework. The same could be said for creating video in a world where sound is optional.

These uncharted waters can certainly be scary but also freeing. Designers and video storytellers have the opportunity to define how we tell stories and communicate messages. If there’s one thing that history will continue to teach us, it’s this: The bold will continue to innovate and create that which all others will follow. 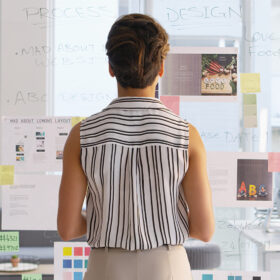 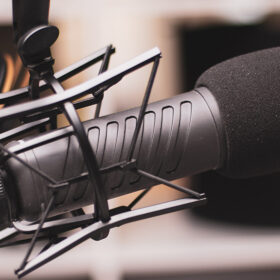 What Gear Do You Need To Start a Podcast?

Peter Kosmal shares some of his favorite podcasting gear to help you launch a podcast of your own.